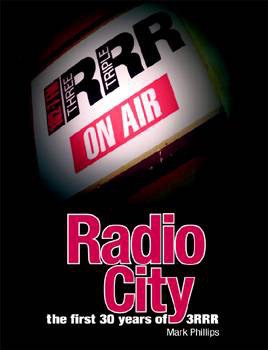 “It’s been proven by some of the greatest observers and researchers in the world that the secret to the economic and business success of a city is its creative heart. Whilst businesses at 101 Collins Street don’t even fucking know it, the reason why they are succeeding is because up the road in Nicholson Street is a radio station that is beating a heartbeat through this city that is unique in the world.”
James ‘Hound Dog’ Young.

“We are not a would-be commercial station and our presenters should not be would-be disc jockeys. We should offer a real alternative to the inanity of high-powered and raucous commercial presentation.”
Sue Mathews, the first station manager of 3RRR-FM.

Over the course of three decades, 3RRR-FM has become an indispensable part of Melbourne’s cultural fabric, a vital hub of the city’s renowned music and arts scenes and an independent voice among a chorus of repetition.

But it wasn’t always so. Born in 1976, the product of an experiment in public radio just as the DIY spirit of punk music was hitting the streets, much of Triple R’s existence was fraught and surrounded by chaos.

Released to coincide with Triple R’s 30th anniversary this November, Radio City is the unvarnished history of Australia’s most innovative and successful community radio station, a jewel in the junk heap that has spawned talent like Greig Pickhaver, the Coodabeen Champions, Kate Langbroek, John Safran, Lawyers, Guns and Money, and Leaping Larry L.

Uncovered are the behind-the-scenes tales of crisis, fighting and perpetual money struggles along with the back stories of the much-loved program presenters who have called the station a home.

Melbourne journalist Mark Phillips spent two years piecing together the previously untold story of how Triple R came about and developed its unique ethos and ground-breaking style. In the process he learnt a little more about what makes Melbourne tick.

A vivid account told in the words of those who were there and chock full of illustrations, Radio City reveals how community radio holds the key to discovering alternative music, films, arts and political topics that would otherwise be left in the dark.

Appealing to Triple R listeners and those interested in the history of alternative culture alike, Radio City is the riveting story of how a radio station became part of a city’s soul.

Radio City has been commended in the best print/publication category at the 2007 Victorian State Community History Awards.

The judges described Radio City as “a fast-paced book, reflecting something of the larrikin personality of 3RRR”.