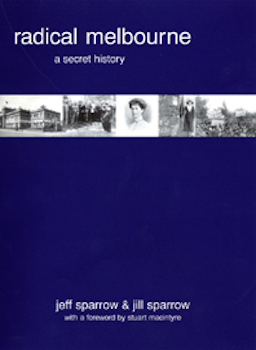 A site for racial war or a feminist paradise? Melbourne’s past contains many struggles over the nature of its future. While the sleazy entrepreneurs who led white settlement imagined Port Phillip merely as a source of rich pasture, others dreamed a different dream.

Radical Melbourne presents a guide through the first hundred years of political radicalism in Melbourne, focusing on the structures, streets and public places that remain today. It concentrates on identifying the physical traces of radical Melbourne, in the hope that geographical familiarity will provide a cultural and political bridge between the struggles of the past and the people of the present.

Radical Melbourne is a secret history of Melbourne, illustrated by rarely-seen images from the archives of the State Library of Victoria. The State Library is the book’s major sponsor and has allowed the authors access to and use of over 80 fascinating historical images never before published in an historical work. The present-day images of the old sites offer startling and sometimes poignant visual contrasts.

Radical Melbourne is also a buried history – sometimes literally. Readers will be shocked to discover that the present-day Victoria Market is situated on thousands of uninterred graves. They will learn of Mebourne’s first vegetarian restaurant and meet the socialist poet who was allowed to build his own shack in the Melbourne Gaol.

Radical Melbourne is not an academic history; nor is it an alternative tour guide for jaded walkers. It documents struggles that matter. Readers of all kinds will acquaint themselves with unimagined political victories and defeats from their city’s past. The authors say that “The secret history of this city seemed to us an inspiration.” They hope that the activists writing their own history among the Nike billboards and Optus towers of present day Melbourne share their enthusiasm, so that Radical Melbourne can play some small part in encouraging future cities based on visions of freedom rather than visions of fear.