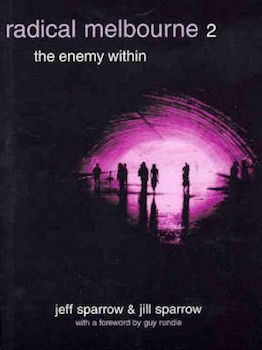 On the streets, under the ground and on the information superhighway, radicals and rebels have made this town their own. The acclaimed Radical Melbourne revealed the hidden history of the city’s first hundred years in what John Pilger called “a brilliantly original, long overdue unveiling of a great city’s true past”. Now Radical Melbourne 2: The Enemy Within traverses the same alleys and lanes to uncover a story of secret police and secret armies, guerrilla artists and underground cells, militant unionists and intransigent peaceniks.

From the Cold War to hot jazz, from teenage rioters to Maoist revolutionaries, take a tour through sixty years that shook Melbourne.