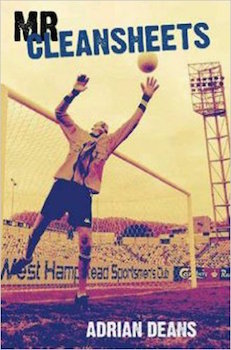 Eric Judd is 39 and his girlfriend wants him to give up playing football. Eric (aka Mr Cleansheets) is a goalkeeping legend at his amateur Sydney club because in his youth he received a letter inviting him to trial with Manchester United. The letter said to “come when you’re ready” – and six days before his 40th birthday, Eric is finally ready.

Inspired by the dying wish of his Uncle Jimmy, Eric travels to England, but does not quite receive the welcome he had hoped for. Instead, he encounters all manner of villains: murderous football hooligans, Irish mafia, dodgy football agents, beautiful pop stars, international terrorists and a range of supporting players with any number of overt and hidden agendas.

Adrian Deans is a 50-year-old lawyer who used to play football for the legendary Dartford Town Sewer Pigs and still plays (for the mighty Avoca FC Gummysharks). He grew up in Sydney and has worked in London. He is well steeped in football culture in both countries.
Mr Cleansheets is his third novel and blends his love of football with his natural inclination for making up bollocks.
He lives on the Central Coast of NSW with his gorgeous wife Karen, supports the Socceroos, Gunners and Mariners, but accepts that it is not entirely unreasonable for readers of Mr Cleansheets to follow other clubs…
As long as they follow Bentham United, yeah?