Recollections and Tales of the Fitzroy Football Club 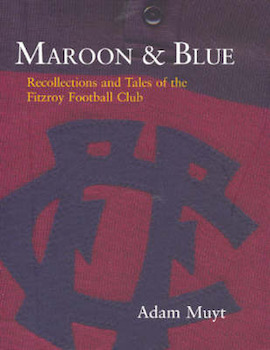 In 1996, the Fitzroy Football Club, the Roys, played their final game of AFL football after more than a hundred and ten years in the competition.

Maroon & Blue is a social and oral history that captures the rich story of the Roys in the words of those who played for, supported and loved the club. It celebrates various aspects of the club’s roots, culture and traditions, captures the passion and joy for all things Roy, and offers heartfelt observations on the sacrifice of the club at the altar of corporate AFL football.

“The ladies and their role are just part of the Royboy lore pulled together by Adam Muyt in this affectionate celebration, described as a social and oral history. It’s a sentimental scrapbook based mostly on interviews with players, officials and fans, which includes an eclectic collection of songs, ditties and poems. Passion abounds. No room here for impartiality. Most in evidence is the raw emotion that drove the club when the balance sheet insisted that was not possible.” – Ken Merrigan, The Age.

Adam Muyt became a Royboy when he moved from Sydney to Melbourne in the early 1980s. Along with the joys of following them, he, along with all Fitzroy barrackers, suffered terribly through their final years. Since 1997, he’s barracked for the Brisbane Lions and is thankful he was there at the MCG to witness each premiership of their triple flag triumph, particularly as he was surrounded by lots of other Royboys and Roygirls. Adam now lives in Canberra and works in native vegetation management. He is the author of Bush Invaders of South-East Australia, undoubtedly the only weed book to feature footy references and people weeding in Fitzroy jerseys. He will always be a Royboy.