The Glory Box Tradition of Coptic Women in Australia 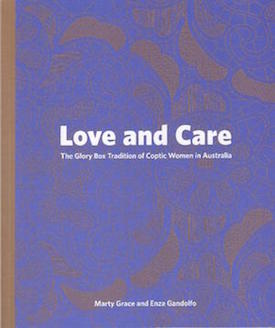 Love and care are key themes in a new book on the glory box tradition of Melbourne’s Coptic women. The book has its origins in The Glory Box Project, a collaboration between Brimbank City Council’s Hunt Club Community Arts Centre, the Coptic Women’s Association and Victoria University, and funded by Arts Victoria.

The authors, Victoria University researchers Professor Marty Grace and Dr Enza Gandolfo, worked with the women during the project to understand their desire to maintain the glory box tradition. The book documents and communicates the women’s stories of their connection to the glory box and associated customs and rituals, to craft and craftmaking and to links between old traditions in their countries of origin and contemporary life in Australia.

The passing down of glory boxes – containing household linen, sheets, embroidery or crockery to young women in anticipation of marriage – has virtually disappeared in contemporary Australia. The book explores what lies behind the tradition, what the women believe will be lost with its passing, what maintaining and renewing it might contribute to their children and grandchildren’s lives. What became clear during the project was that it’s not the glory box as a material artefact they’re afraid of losing, but what it symbolises: the love and care passed on from mothers to daughters and the cultural continuity associated with it.

Ten Coptic women are highlighted in the book with images of the craftwork they made during the project and their stories and ideas about the meaning of the glory box to them.

‘The glory box story is about love and I want the whole world to know,’ says Madonna Awad, the Coordinator of the Coptic Women’s Association and one of the women featured in the book.

‘For me,’ adds Magda Yassa, ‘the glory box says, I care for you. I did something especially for you. Not for everyone, but for you. I thought about what you like and I put it in the glory box… My caring. Love with care.’

Love and Care: The Glory Box Tradition of Coptic Women in Australia is a book about love between mothers and daughters, about the importance of tradition in maintaining cultural continuity especially for migrant women. It is also about passion, creativity and community.