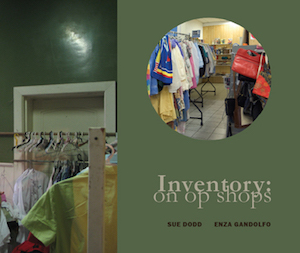 Op shops are places of mystery and adventure that inspire ‘treasure hunting’. They are ‘museums’ displaying cultural artifacts – objects, clothes, books—that often bring back lost memories. They are places that trigger many emotions—including nostalgia, longing and passion. Op shops are crowded with narratives that are lined up on shelves, piled into boxes, hanging on racks—lost personal and cultural narratives waiting to be told.

There has been very little written about op shops in Australia—hardly surprising as op shops are predominantly staffed by volunteers, the majority of them women over 65; they are run by charities who are inevitably more focused on the programs run with the money raised by these shops; and they tend to be frequented, though this is changing, predominantly by those in the margins—single mothers, the unemployed, the elderly and others whose limited income means they cannot afford to buy from commercial retail stores.

Yet most local shopping centres have an op shop or two and they have been part of our communities for over 50 years. Sue Dodd and Enza Gandolfo, have spent several months in op shops interviewing volunteers, staff and customers. Inventory: On Op Shops tells the story of that exploration. It is polyphonic work– textual, visual, and performative—that explores the role and meaning of op shops to individuals and communities.

The original project, Op Shopping: More than Retail Therapy, was a collaborative arts project that utilized a mixed-media and multi-disciplinary approach. The project was funded by Arts Victoria through the Art for Communities program and supported by Victoria University and the Living Museum of the West. The exhibition opens 13th September 2007 at the Living Museum.

I op therefore I am – Blog Review, Melbourne Op-Shopping

Enza Gandolfo is a lecturer in Professional Writing at Victoria University. Her short fiction, essays, autobiographical pieces, reviews and academic articles are published in a variety of literary magazines and journals including: Overland, Tirra Lirra, Hecate, Outskirts, Going Down Swinging, TEXT, JAS Review of Books, and Australian Women’s Book Review. Recent publications include: ‘The Robust Imagination’ in TEXT 2006 and ‘Fiction Making: A dialogue’ in ‘Art-Based Research: a proper thesis?’ Edited by Elaine Martin and Judith Booth 2006 Common Ground Melbourne

Sue Dodd has developed an artistic practice that incorporates simultaneously performance, video and installation. Her performances and video work are an acutely post-modern reflection on contemporary life. Dodd is part of the performative group Gossip Pop (with Phil Dodd) which employs an amalgam of performance and video to create a simulacrum of pop and celebrity culture, and serious performance art. Gossip Pop utilizes sampling, displacement and deconstruction in the tradition of beat poetry, feminist performance and karaoke. Dodd has performed and exhibited in widely in Melbourne and throughout Australia. She has recently returned from a residency in China. Sue is currently lecturing at Victoria University and completing Phd research in Creative Arts at RMIT.