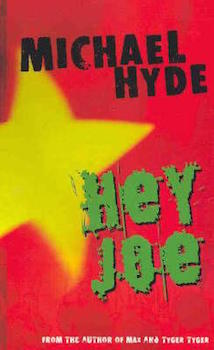 Jimi doesn’t know his father, Joe; the least he can do is go to Vietnam and try to find him. With the aid of Joe’s half-written novel, an uncanny sense of direction and more than a dash of luck Jimi sets off on a search for his father… and himself.

The author of MAX and Tyger Tyger is back with his third novel… and this time it’s personal – the story he has been trying to write for a long time. Michael reaches into his own past and discovers a story from his Vietnam activist days – a story that has haunted him for thirty years – a story of the choices his generation made and the price they paid then and are still paying now.

He says, “I was what you might call ‘busy’ during the Vietnam War; and I made some choices that are still reverberating in my life – most of them I’m glad I made.” Yet, as he points out, “sometimes I wonder whether I, like the culture around me, tried to bury the past; whether we all just forgot to deal with it. Despite impressions to the contrary, Vietnam is the gap in our records. Where, for example, are all the novels of the Vietnam War, especially those that give the counter-culture’s side of the story?”

Michael has moved to correct that absence, writing a novel that is about the War and its effect on all Australians: soldiers, civilians, protesters and their mystified children. Typically energetic and evocative Hyde pushes and chases shadows around Vietnam until, in a fitting climax…

“Hey Joe may be the first novel that tells the story of the sixties in Australia from the point of view of a protestor. In Joe Thorn, Michael Hyde has created a character who embodies both the idealism and self-indulgence of that generation. Thorn’s son, Jimi, brings a contemporary perspective to the book. Written with an ear for Australian vernacular, Hey Joe is a deeply felt novel that unravels a secret that highlights significant aspects of that country’s tragic conflict.” – Arnold Zable.