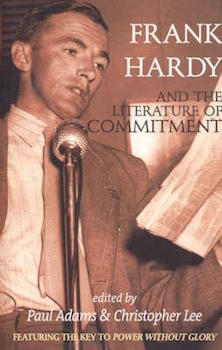 This is the first collection of major critical essays on ‘the most Australian Australian’. Including work by John Frow, John McLaren, David Carter, Cath Ellis, Nathan Hollier, Carole Ferrier, Delys Bird, Peter Williams and Cathy Greenfield, the editors have gathered material from a broad and impressive variety of sources and critical perspectives.

“When Frank Hardy died peacefully at his home on 28 January 1994, feet up on the table and the racing form-guide in hand, Australia lost one of its great larrikins. He was Australia’s most famous communist writer, who published six novels, three books of non-fiction and more than a dozen collections of stories. In the process, he cultivated a reputation as the country’s most celebrated working-class writer, yarn spinner and despiser of authority, debt-collectors and parking police. He will be remembered as a major literary and radical-political figure of twentieth-century Australia.” – The Dictionary of Literary Biography.

Paul Adams is a senior lecturer in the Department of Communication, Languages and Cultural Studies at Victoria University of Technology. He has recently published a literary biography on Frank Hardy The Stranger From Melbourne: Frank Hardy – A Literary Biography, 1944–1975.

Christopher Lee is a senior lecturer in the Department of Humanities and International Studies at the University of Southern Queensland. His most recent publications is Authority and Influence: Australian Literary Criticism 1950–2000 (with Delys Bird and Robert Dixon). He is currently President of the Association for the Study of Australian Literature.