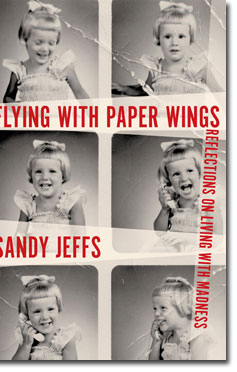 Sandy Jeffs grows up in an Australian country town in the 1950s and 60s, domestic violence ripping her family to shreds. As a student in the 1970s she comes to terms with her sexuality as part of an alternative family. With the onset of schizophrenia at age 23 Sandy’s world falls apart. Flying with Paper Wings offers privileged insights into madness – medical, social, personal – as well as disturbing reflections on its causes and its care. It is also a story of how poetry can become a personal saviour in the face of nearly irresistible forces.

“Flying with Paper Wings is anything but a misery memoir. Glittering with black humour and without self-pity, it shifts other people’s perceptions of mental distress beyond kindness, compassion, sympathy and fear into some deeper perception. The mentally unwell have not disappeared with the decommissioning of the ironically named ”asylums”, and as communities expand, stress and fracture at a speed we are not made to cope with, we will see more forms of mental illness.

It is easy to look the other way, or to stuff the outstretched hand in the street with money as you take to your heels. Read this exceptional book. It takes you beyond your own narrow terror towards something that might be called insight.” – Helen Elliott, The Age, November 2009.

“The biggest satisfaction I gained from reading this book was the realisation that this is an exceptional record of someone who is still gravely ill, and yet is able to surface over and over again, with mind and humour still intact. It has a depth which gives it strength. It has a warmth and honesty that is refreshing.” – Anne Deveson.

“Ultimately, it is Sandy’s insight into fighting the monster of psychosis that makes this book valuable to the many people – too many – in our society that have had to fight similar demons. Whether Sandy’s voices will ever be stilled is hard to say. She says of them: ‘It’s like a war of words between us. I hope it will be me who has the last word.’ With this book, that will outlive both her and them, I believe she has.”- Andrew Denton.

The Poet and the Madwoman – Late Night Live interview with Phillip Adams, November 2009.

A poet, schizophrenia and a compelling tale – Melissa Sweet for Crikey, November 2009.