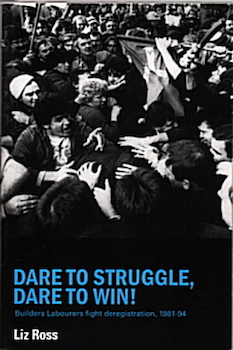 An inevitably controversial look at the history of the struggles on the Builders Labourers Federation and the twenty year campaign to smash Australia’s most militant union.

“Dare to Struggle, Dare to Win!” If one phrase can sum up the militant Builders Labourers Federation it was this. Because they believed this, and backed it with action on the job – the courts and governments of the 1980s declared the BLF had to go.

Conservative governments took the first steps, but it was Labor – backed by leading members of the ACTU and union movement – which finished the job. Subject to a Royal Commission, accusations of corruption against union secretary Norm Gallagher, trials, Arbitration Commission hearings and coordinated federal and state legislation the BLF was under siege for years. Then in 1986 the full force of governments and their police fell on the union when it was formally deregistered. But this is not a story of defeat and despair. It is a story of resistance, much of it told in the words of the most important actors in this drama – rank and file workers. Builders Labourers and their supporters in other unions and the community waged a long struggle for union rights and militancy that has important lessons for today.

While highlighting the rank and file struggle, Liz Ross pulls together all the threads in this complex story and provides a left-wing analysis of the role of the employers, ALP and union leaders, and the historic ALP-ACTU Accord.

Here is the full story for the first time. The book is meticulously researched, with extensive use of archives, original union material and fify-seven interviews with participants. The author was also directly involved in many of the events she describes.