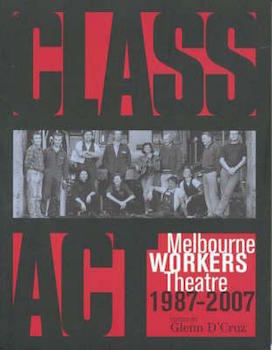 With a few notable exceptions, middle-class themes and middle-class personnel dominate professional theatre in Australia. Melbourne Workers Theatre (MWT), which celebrates its twentieth anniversary in 2007, has redressed this imbalance by creating high quality theatre that represents the lives of the most disadvantaged members of our community. In short, the company has made a major contribution to Australian theatre culture by giving voice to marginalised Melburnians including people from impoverished backgrounds, indigenous communities, various migrant groups and persecuted minorities like asylum seekers.

Class Act celebrates the Company’s artistic achievements and successes over the last two decades through interviews, essays and high quality images of key productions. It recounts its history, its evolving relationship with the embattled trade union movement, and its on-going engagement with working class, indigenous and migrant communities.

Class Act is more than a history of a theatre company. It documents a particularly turbulent period in Melbourne’s history that witnessed consistent attacks on trade unions, asylum seekers, aboriginal and working class people by state and federal governments, and the forces of globalisation. In an era when the very concept of ‘class’ has been discredited, Melbourne Workers Theatre remains committed to principles of social justice and revels in using theatre as a form of political activism and protest.

The book contains new interviews with founding members of the company and key artistic personnel, including Patricia Cornelius, Irine Vella, Andrew Bovell, Andrea James, Julian Meyrick, and Christos Tsiolkas. It also includes production images drawn from the company’s extensive archives, and essays that document the company’s history and analyse its landmark productions such as Who’s Afraid of the Working Class, Yanagai Yanagai, and Tower of Light.

“The Melbourne Workers Theatre is one of this town’s great successes. Not only has it nurtured talent […] it has also expanded a long way from its origins. It is a tribute to the strength of Melbourne’s theatrical tradition that this company is thriving as it begins its 16th year.” – Robin Usher, Arts Editor, The Age, 5 May 2002.

Glenn D’Cruz is Senior Lecturer in Drama at Deakin University. He has published widely in the areas of theatre and performance studies. His academic work has appeared in prestigious national and international journals, including Meanjin, New Theatre Quarlerly, Modern Drama, Life Writing, The Journal of Intercultural Studies and The Journal of Commonwealth Literature. He is reviews editor for Australasian Drama Studies, and the former chair of the MWT Committee of Management. His book Midnight’s Orphans: Anglo-Indians in Post/Colonial Literature was published in 2006.