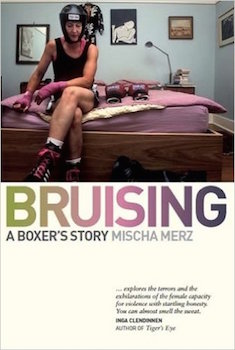 “I regard having someone try and hit me in the head as almost a friendly gesture. In fact I have made some friends that way and really only lost them when we stopped hitting each other.”

Bruising is the story of Merz’s long love affair with the art of boxing – from throwing and receiving her first punches – to competing in an Australian amateur title fight and beyond. Boxing opens her to new ideas about what it means to be a woman, it tests her courage as well as her physical limitations and connects her with others in unexpected ways. It provides her with the thrilling and often hilarious background against which to examine myths about feminine virtue and physical weakness.

Bruising, which was short listed for the Dobbie Award in 2001, and this latest edition is updated with new material based on a trip to New York where Merz spent time training with the women at one of America’s oldest and most famous boxing gyms.

“Bruising takes us deep into the illicit realities of female anger and aggression, and then by way of the male stronghold of the boxing gym into the ring… Merz makes her own body, discipline and courage her subjects of experiment as she explores the terrors and the exhilarations of the female capacity for violence with startling honesty. You can almost smell the sweat.” – Inga Clendinnen, author of The Tiger’s Eye.

“Every now and then a book comes along that invites you to shake off your dusty old prejudices, and stop thinking along dichotomous lines… it’s a gripping read and a timely call to re-examine both sanctioned and unsanctioned violence.” – Sian Prior, The Age.

“The work fits comfortably within the stylish non-fiction popularised by writers such as Dava Sobel, Helen Garner and Janet Malcolm.” – Mary Rose Liverani, The Australian.

“I like writing that explores experience in a naked way. I particularly like it when the writer uses words with the fidelity of a harp string. This is a book about a young woman with an intellectual orientation to life who takes up boxing. I can honestly say I have never read anything like it.” – Martin Flanagan, The Age.

Mischa Merz is a journalist and author of both fiction and non-fiction. She has worked for newspapers and magazines for twenty years. Bruising, originally published by Picador Australia, has been reissued with updated material, by Vulgar Press. She lives in Melbourne with her husband Peter.

Mischa Merz Undefeated in 5 US Fights