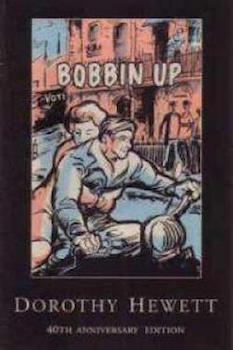 The present edition contains a corrected text of the first edition and includes a new introduction by the author as well as her introduction to the 1985 Virago edition. Stephen Knight’s important essay, ‘Bobbin Up and the Working-Class Novel’ and Nathan Hollier’s look at the 40 years of Bobbin Up’s critical reception are also included to make this edition appeal to both casual and scholarly readers.

“Dorothy Hewett’s novel told us in the fifties that women could go a lot further in private and public spheres. The second wave women’s movement took up the same challenge. At the end of the 1990s, Bobbin Up helps us to remember that it’s still more exciting to occupy your workplace than get married.” – Carole Ferrier.

“Forty years after its first publicaton and several European translations Bobbin Up, a classic of industrial fiction, is coming home. This document of urban working-class life in 1950s Australia is also a remarkably well crafted novel, combining the shifting narrative viewpoint pioneered by Modernism with a relentless realist mode. Well before the upsurge of feminism Dorothy Hewett homed in on embattled female lives. The book abounds with portraits of working women, married and unmarried, middle-aged and young, zestful and tired. These varied existences form the collective hero(ine) of a novel whose social message has lost nothing of its urgency. Unemployment, experienced or dreaded, haunts people’s lives now as then. At the end of the twentieth century the appalling working and living conditions of the poor described here in graphic detail still obtain, not only in the Third World but also in the sweatshops and depressed areas of the First.” – H. Gustav Klaus.

Nathan Hollier on the Critical Reception of Bobbin Up.