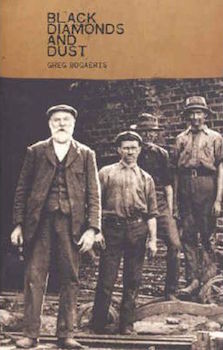 Set in Newcastle, Australia in the bleak 1880s and 1890s, Black Diamonds and Dust excavates a rare seam in Australian writing, the coal-mining novel. It tells the story of the miner Edmund Shearer and his family. The opening scene depicts the central character’s narrow escape from a disastrous collapse in an estuarine mine in which his likelihood of drowning is about equal to his chances of being crushed to death under the black diamonds.

Through Edmund, a strange and moody man, we are told the story of a community, its tragedies, its struggles and its ever-present capacity for outbreaks of humour and festive joy in the face of adversity. Afraid of the bush and the bowels of the mine, Edmund prefers his home and the cleared spaces around it. He can be read as symbolising white Australia’s relationship with the Australian landmass – until events force him away from his place of comfort. The novel is ultimately one of reconciliation, an uplifting story that suggests nobody is irredeemable and no society has to remain the way it is.

“Save yourself from the American cultural tsunami. Read Greg Bogaerts’ distinctively, shamelessly Australian story and chuck away your Deputy Sherrif’s badge. Be your own cultural copper and find Australian black gold.” – Bruce Pascoe, 2005.

“Unaffected, humane, knowledgeable about people and places, the elemental earth and the people who work upon it, Greg Bogaerts’ voice is an important one for Australian literature. Newcastle needs its stories told, and Greg Bogaerts is well equipped to tell them.” – Nicholas Birns, Editor, Antipodes.

“Greg: I started your novel on the weekend and couldn’t put it down. Such strong characterization and fine writing. There are many memorable passages, but ones that stand out are Edmund’s vision of the cockatoo and those describing his time in, and emergence from, the bush. You keep control of what is, after all, a vast story, despite the essentially single locale — vast in terms of human psychology and family history, as well as the particular segment of Australian labour history that you know so well. I don’t know where you stand on Patrick White, but, as I admire his work greatly, I’ll take a chance. In Edmund you’ve created a protagonist worthy to be spoken of in the same breath as those larger-than-life figures in White’s best fiction. Your sensitive portrait of the complexities of gender relations is admirable, as is your willingness to give voice to strongly-delineated female characters. I’ve never figured out why some works are elevated by critics and the media and others, just as worthwhile, are not. I hope you are receiving your due for this book at home and abroad.” – J.A. Wainwright, McCulloch Professor in English, Dalhousie University.

Greg Bogaerts is a Newcastle writer. He has been a schoolteacher, solicitor, BHP labourer and taxi driver. His stories, generating from his working life experiences and centring upon Newcastle and Novocastrians, have been published in journals, newspapers and anthologies in Australia and America. Black Diamonds and Dust is his first novel.