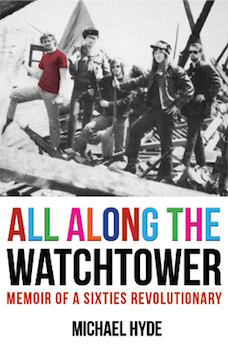 Michael Hyde spent the sixties opposing Australian and US involvement in the Vietnam War – a conflict at the heart of that turbulent decade. As opposition to the war grew exponentially, tens of thousands of young people took up the fight against it and the social ills of racism, poverty and inequality.

Michael’s personal journey from Christian pacifist to student revolutionary was as wild as the sixties itself. Trips to the Cultural Revolution in China and to Cambodia to meet the Viet Cong, breaking the law, demonstrations, arrests, living on the run, communal houses, music, drugs and sexual liberation were all part of the rollercoaster of rebellion.

The young radicals wanted to make the world a better place and they weren’t about to be deterred. This is one of the first stories of that era reported through the eyes of someone right in the thick of it, someone who lived every moment of the Sixties, someone who was there and who remembers.

“Michael Hyde outmatches our expectations for the memoirs of a student revolutionary. He does not tell us what the Sixties meant, but shows us what they were like through explorations of the drifts between friendship and comradeship, and the giddy mix of sexual politics as ideology and intimacy. Throughout he recreates what it felt like at the time – to be batoned into unconsciousness; to burn one’s draft card; to hear now legendary lyrics for the first time. Holding these strands together is Schopenhauer’s rule for fine writing: have something to say.” – Humphrey McQueen

“LATE in the 1960s, while our troops fought major battles in Vietnam, left-wing extremists conducted mini-battles in our city streets.
The Vietnam War was both the cause and the catalyst for radical dissenters, whose ultimate aim was to overthrow the “imperialist US” and establish an egalitarian society through – they believed – Maoist Communism. Monash University in Melbourne was a major hotbed of student protest, and Hyde was among the leaders. He visited Communist China and, coincidentally, flew over South Vietnam on the first day of the Tet Offensive en route to Phnom Penh. The ardent ringleaders, using violence and propaganda and burning draft cards, gradually aroused public consciousness. By 1970, anti-war rallies were attracting 100,000 people.
Radical activists such as Hyde required raw courage to defend their beliefs and their bodies against the vilification of press, politicians and police. The stress took its toll, sometimes irrevocably. Hyde’s intimate account explains why. As if the 21-year-old Hyde were speaking, he writes easily and vividly, as you’d expect from this veteran author.
Without recrimination, soul-searching or hubris, he revives the 1960s angst and rites of passage. When he traces the escalation of events culminating in open rebellion on campus, All Along the Watchtower becomes a quasi manifesto on power and crowd behaviour.
Already the 60s wear the faint penumbra of history, but Hyde delights in the legacy he helped achieve. Here he gives future Australians an understanding of the way we were, conservative or radical.” – Barbara Barker, Courier Mail Review (Saturday 18th December 2010).

Michael Hyde has been writing and teaching writing for 30 years. He has published more than thirty books of fiction and non-fiction. His Young Adult novels in particular have been critically acclaimed and widely studied in Australian schools. After 25 years of secondary teaching he now lectures in writing and literature at Victoria University in Melbourne. He is a regular guest at Literature Festivals and conducts writing workshops for teachers and students across Australia. He lives in Melbourne with Gabrielle and Zachariah, the youngest of his four children. Michael loves rivers and the sea and is a passionate Collingwood supporter.